Murky story of a ship called the Rhosus, which began life as a Japanese dredger

Boris Prokoshev, right, captain of the cargo vessel Rhosus, and boatswain Boris Musinchak, pose next to a freight hold loaded with ammonium nitrate in the port of Beirut, in a summer 2014 photograph.    © Reuters

Andrew North has reported widely from across the Middle East, South Asia, and Central Asia. He is a regular commentator on Asian affairs.

This is the story of a ship that was built in Japan in 1986.

Named the “Daifuku Maru No. 8,” maritime records show that it began life as a humble dredger, scooping up mud and rock from Japanese shipping lanes so that bigger craft wouldn’t hit the bottom. Then, in 2002, it was sold to South Korea and renamed. So began a journey around the world, during which the ship’s name, owner and the flag flying from its mast changed every few years.

What are known as “flags of convenience” (FoCs) provide a legal way for a shipping company from one country to reduce costs down by “renting” the flag of another country that has lighter labor rules and lower taxes. Many of these flags are run by smaller, and often poorer countries, ranging from Liberia to North Korea, even landlocked Mongolia and Bolivia. It earns these states valuable revenue, but it also provides a way for unscrupulous owners to conceal their identities while running substandard and polluting ships, as well as dodging the law and cheating their crews.

Between 2005 and 2007, the Japanese-built ship was passed between two Hong Kong companies who called it the “Zheng Long” but flagged it to Belize and then Panama, the tiny Central American state that has nearly 9,000 ships sailing under its flag. That’s around 16% of global shipping tonnage, more than any other country.

Once notorious for its lax rules, Panama now keeps closer tabs on who can fly its colors. So it was telling that when a Panamanian company bought the ship and converted it into a cargo freighter, it was reflagged to the Black Sea nation of Georgia — another country known for running a low-cost FoC regime.

There were still more identity changes to come. First, a Cyprus-based Russian business owner bought the freighter. But when it was sent to pick up a shipment from the Georgian port of Batumi in 2013, the Georgian flag had been replaced with the colors of Moldova, a country with no seaside coast but a reputation at the time for allowing its flag to be used for smuggling by Iranian vessels.

Showing its age, the now 30-year old ship had defects that included a hole in its hull requiring water to be pumped out to stop it sinking, but it set sail nonetheless. When the Russian owner didn’t pay wages, the crew walked out, forcing him to find another crew before sending the vessel out to Beirut to earn extra cash by taking on heavy machinery. When the ship’s decks buckled under the weight, inspectors were alerted and it was declared “unseaworthy.”

The former Japanese dredger was by then named the “Rhosus,” which the world now knows as the ship that carried the 2,700 tons of Georgian-made ammonium nitrate that exploded in Beirut port on August 4 with such deadly effect. 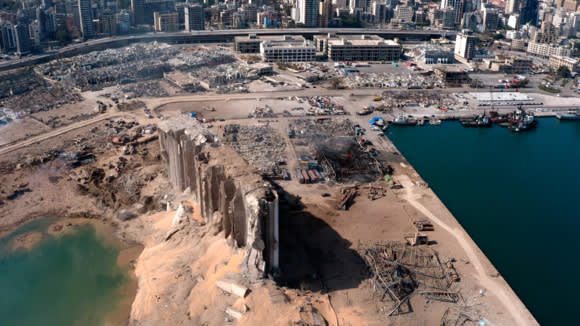 A former Japanese dredger named the “Rhosus,” carried the 2,700 tons of Georgian-made ammonium nitrate that exploded in Beirut port on August 4, killing up to 158 people, and injuring more than 6,000.    © Reuters

In the aftermath of the disaster, the focus has rightly been on the failings of Lebanon’s dysfunctional government, as the explosive cargo was its responsibility once offloaded. But the murky story of the Rhosus also raises questions as to why an international system almost designed to avoid accountability is allowed to continue.

The International Transport Workers’ Federation (ITF) has been campaigning for an end to FoCs for decades. It lists 35 countries running flags of convenience, blaming the practice for low wages and abusive conditions among merchant navies, as well as the “floating coffins” on the world’s seas.

Some maritime experts argue that the story of the Rhosus shows that controls worked because the ship was eventually stopped in Beirut. According to Natasha Brown, spokesperson for the International Maritime Organization, the UN’s shipping regulation body, more and better inspections have led to a decline in serious incidents in the last seven years.

Japan, the US and Europe all operate a system of white, gray and black lists to classify flags by their record, with frequent inspections for poorer performers. “That makes it more difficult for an owner to keep using a blacklisted flag,” argues Luc Smulders, Secretary-General of the Paris MoU, the organization that oversees European inspections.

But such measures still don’t go far enough. Blacklisting doesn’t stop a ship from sailing, and there are plenty of ports beyond the reach of organized inspectors. Groups such as the ITF say that until there is a “genuine link between the flag a ship flies and the nationality or residence of its owners,” abuses will continue.

Moldova is a case in point. Seven years after the Moldovan-flagged Rhosus was stopped in Beirut, the country is on the official flag performance blacklist. But it continues to run a lightly-regulated shipping registry for all comers. You can do it all online with no mention of any physical checks. (The country’s ship registration agency did not respond to several requests for comment.)

With all that has since emerged about the Rhosus and its past, many have wondered how it was ever allowed to sail with so much explosive material on board. But as things stand, there is little to stop another ship with a shady past from setting sail today.