The CargoChain platform was borne out of witnessing first-hand an inability to share supply chain information amongst multiple interested parties. David Lindsay, CargoChain CEO said “we observed this first with ports and then looked across the entire supply chain, and the problems were the same. Siloed, important information that supply-chain actors didn’t have, but needed, to make better decisions”.

Lindsay adds that following five years of R&D, CargoChain has created a cargo information sharing and innovation platform that supports the distribution of previously unavailable cargo information, as well as the development of third-party applications. “We believe that the collaborative and independent nature of the CargoChain platform is a first for the global industry.”

“The proposition is made even more powerful as today’s consumers are demanding trust while those involved in the supply chain require full transparency and visibility. We saw the need for a digital platform that provides this by sharing trusted information amongst all supply chain actors.

“CargoChain is one of the few supply chain solutions in the world that has blockchain as an integral working part of its platform to provide this trust.”

“Blockchain is currently right at the top of the technology hype cycle and most companies understand its importance but are really struggling to understand how they might use it in their business. CargoChain takes this pain away, as it already delivers a working blockchain solution for our customers”.

While blockchain is an important part of CargoChain, Lindsay notes that the platform itself provides significantly more to supply chain actors.

CargoChain’s ultimate vision is to empower the supply chain by providing its platform to application developer communities globally.

“We want to allow developers to solve the world’s supply chain problems for all logistics players, large or small.”

Initial CargoChain applications are already in development for a number of Australian and New Zealand customers, along with pilots for other significant supply chain projects. In New Zealand there is also significant interest from major food exporters, driven by the need to prove complete provenance with an emphasis on food trust and safety.

MAN Cryo, the wholly owned subsidiary of MAN Energy Solutions, has – in close cooperation with Fjord1 and Multi Maritime in Norway – developed a marine fuel-gas system for liquefied hydrogen.

Multi Maritime’s hydrogen vessel design for Fjord1, including the fully integrated ‘MAN Cryo – Hydrogen Fuel Gas System’, has been granted preliminary approval in principle, “AIP”, by the DNV-GL Classification society. The award is significant in that the system is the first marine-system design globally to secure such an approval.

Dr Uwe Lauber, CEO of MAN Energy Solutions, said: “Winning this approval is a significant development for a number of reasons. As a solution for vessels employed on relatively short maritime routes, such as ferries, this technology is a world-first and showcases our company’s ability to deliver genuinely innovative solutions. Furthermore, Hydrogen is a clean fuel whose profile fits perfectly with the general desire within the industry to move towards cleaner technology. The possibilities for this technology are varied and exciting.” 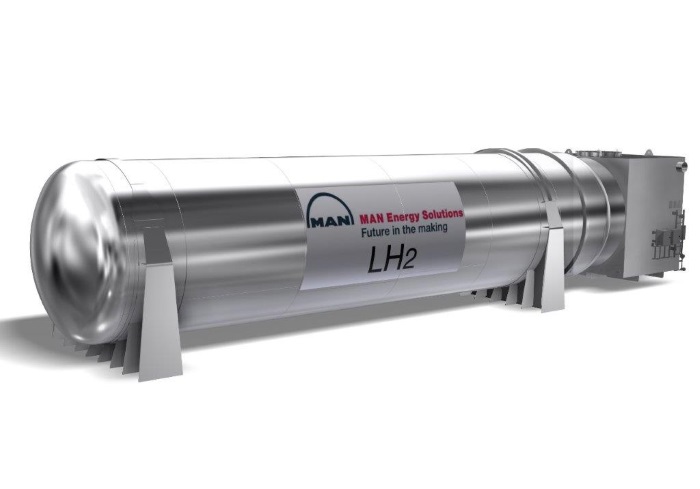 Louise Andersson, Head of MAN Cryo, said: “To secure this approval in principle shows the determination that MAN Energy Solutions has to advance cleaner shipping solutions.”

She continued: “Our strategy is to actively work with our customers to design and promote cleaner ways of powering vessels, and the competence and energy within MAN Cryo conveys this strategy excellently.”

The system has a scalable design that allows easy adaptation for different shipping types, sizes and conditions. The design is suited for both above- and below-deck applications, offering ship designers the flexibility to optimise their designs in relation to efficiency, and to cargo or passenger space.

MAN Cryo has long experience with cryogenic gases and solutions for storage and distribution. The company has also made numerous hydrogen installations over the years on land that, in combination with its extensive experience from marine fuel-gas systems for LNG, have been invaluable when designing the new system.

Liquefied hydrogen has a temperature of -253° Celsius and is one of the absolutely coldest cryogenic gases there is, which places system components and materials under extreme stresses. Another design challenge was hydrogen’s explosive nature, with the MAN Cryo engineering team accordingly placing top priority on safety. 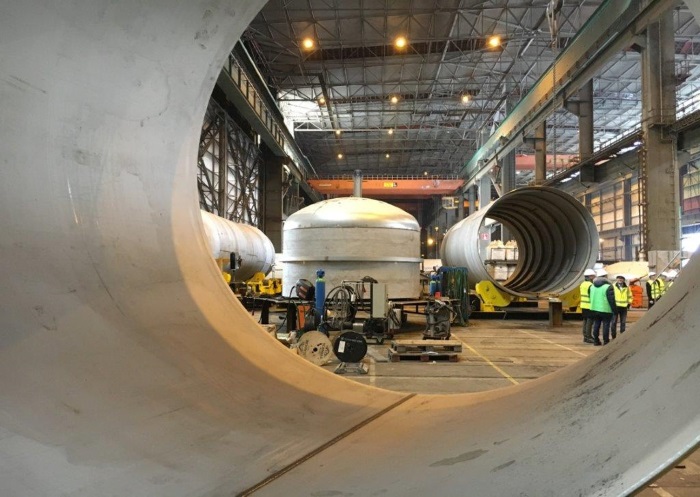 Once liquefied, hydrogen is reduced to 1/800th of its volume, compared to that of its gas phase, facilitating a more-efficient distribution. As a fuel, hydrogen does not release any CO2 and can play an important role in the transition to a clean, low-carbon, energy system. Liquefied hydrogen can be used to charge batteries for electrical propulsion via fuel-cell technology. MAN Cryo states that it sees a bright future for hydrogen applications globally as part of its target of achieving zero fossil emissions within the marine sector by 2050. In particular, Norway is currently developing several promising hydrogen applications.

Shipping in particular is facing great challenges with regard to more environmentally-friendly fuel sources, which is why MAN Energy Solutions has argued in favour of what it terms a ‘Maritime Energy Transition’ for some time as the most promising way to achieve a climate-neutral shipping industry.

The term ‘Maritime Energy Transition’ stems from the German expression ‘Energiewende’ and encapsulates MAN Energy Solutions’ call to action to reduce emissions and establish natural gas as the fuel of choice in global shipping. It is also an umbrella covering all MAN Energy Solutions’ activities in regard to supporting a climate-neutral shipping industry. Launched in 2016 after COP 21, the initiative has since found broad support within the shipping industry and German politics.

MAN Cryo offers systems for the storage, distribution and handling of liquefied gases and has a pioneering reputation within the marine sector and LNG business development. It supplied the world’s first LNG fuel-gas system for the ‘Glutra’ ferry in Norway in 1999, a vessel that is still operational to this day. More recently, in 2013, MAN Cryo supplied the world’s first bunker vessel, the ‘SeaGas’, with operations in Stockholm, Sweden. The design for the conversion of the SeaGas was also provided by Multi Maritime with whom MAN Cryo has a long-time cooperation.
Source: MAN Energy Solutions

ECSA and the World Shipping Council (WSC) welcome the adoption of a General Approach on the proposal for a European Maritime Single Window environment by Transport Ministers yesterday.

European co-legislators have been working intensively to reduce the administrative burden shipping faces. This burden stems from today’s unharmonised and inefficient reporting obligations and mechanisms within the EU. ECSA and WSC are pleased with the progress being made in both Council and European Parliament towards the establishment of a European Maritime Single Window environment (EMSWe).

Martin Dorsman, ECSA’s Secretary General, commented: “With the adoption of this General Approach the Member States agreed to facilitate, simplify and harmonise the reporting to be done and take a step towards a real internal market for shipping.”

John Butler, CEO and President of the World Shipping Council commented: “The shipping industry is looking to the EU Institutions to deliver a European Maritime Single Window environment that remedies the deficiencies and costs that arose from the original Directive and its lack of a common blueprint for implementation by Member States. Because of those experiences it is even more important to make sure the agreed legal framework provides what’s needed to bring about real and tangible benefits to Europe’s maritime commerce”.

ECSA and WSC are pleased to see in the Council’s text a clear commitment to establish a harmonised data set, which is essential to reach real trade facilitation. The Council has agreed that the data elements must be kept to only the essential reporting information that is required and that additional temporary requirements are only added in exceptional and duly justified circumstances. Martin Dorsman added: “This is a very necessary addition, as we must be sure that once the spring cleaning of the reporting obligations is completed, this will not be undone the next day by allowing authorities to request without restrictions, any additional information in parallel to the EMSWe harmonised data set.”

The European Parliament Transport Committee is also making important improvements to the proposal. Both the draft report of MEP Ms Clune, the rapporteur, as well as several of the amendments tabled by her fellow MEPs are in line with requests from the industry to simplify and harmonise, not only the data, but also the reporting mechanism.

Martin Dorsman added: “On this last element, the ‘how’ to report the data or the so-called ‘reporting interfaces’, we stress the need to make sure these interfaces are truly harmonised and common, both for system-to-system reporting and manual reporting using websites. We very much welcome amendments from MEPs that look at providing a single acess point at EU level and harmonisation of the manual reporting tools (the Graphical User Interface). We stress this would not replace existing well-functioning reporting mechanisms, provided by some port community systems and national single windows. However we should not forget these do not exist in all ports and Member States. We cannot miss this unique opportunity to bring all EU ports to an advanced level by providing a common baseline standard, to the benefit of trade in general and short sea shipping in particular.”
Source: ECSA

Shipping Container IoT visionary Loginno is leading an all-star initiative to select one shipping company, whose entire container fleet will be digitalized in 2019.

They call this initiative “The Contopia Factor,” or TCF for short, a paraphrase of the well-known reality show using a new buzzword. Contopia (a mesh of “Container” and “Utopia”), is a term used to describe a world where every shipping container is real-time IoT connected. 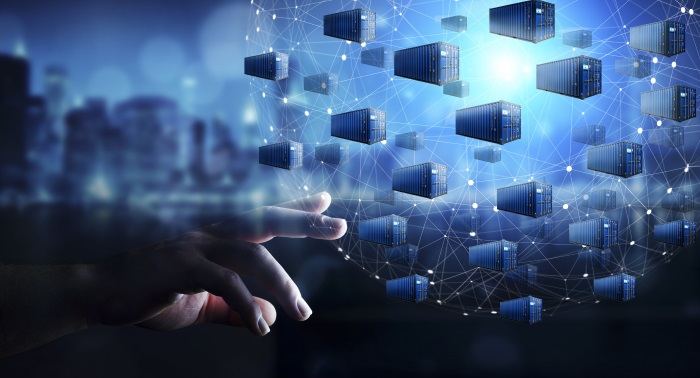 During the 6-month process, shipping companies of mid to small size will have the chance to submit an executive summary, detailing what they will do exactly if they are selected to equip their entire fleet with Loginno’s patented AGAM devices. A panel of industry leaders will then decide who will be the lucky winner to be propelled to the forefront of marine innovation.

theDOCK is part of a group of Contopia partners, all innovation leaders and market leaders in their space, such as Lloyd’s Register (leader of the classification and marine services market), Sunwoda (electronics manufacturing giant) and IAI (defense innovation leader), with more to be unveiled soon. Says Dr. Rami Pugatch, one of the leading operations researchers at the department of industrial engineering and management at BGU, itself a TCF partner: “We are going to create a unique sandbox, previously unseen in the marine sector, in which many Contopia use cases could be tested in real-life scenarios.” Some of the use cases include the onboarding of scale-less weight measurement, SOLAS VGM compliant, the development of a “Cyber Seal” certificate to replace a container’s physical seal, as well as use cases in operational optimization, supply chain management, smart cargo insurance and frictionless country borders.

“The shipping industry is ripe for disruption and for a dramatic technological upgrade,” said Shachar Tal, Loginno co-founder in a recent interview to software giant SAP. Loginno co-founder Amit Aflalo adds: “The Contopia Factor serves shipping companies with an offer they can’t refuse: a package of competitive advantages, profitability improvements and the halo of being a true innovator. I don’t know of any eligible shipping company who would miss such an opportunity.”
Source: Loginno