Home News Covid-19 rules for ship crew: ‘It’s worse than being in prison’

A ship’s captain is describing the way crew are being treated during Covid-19 as inhumane and like being in prison. 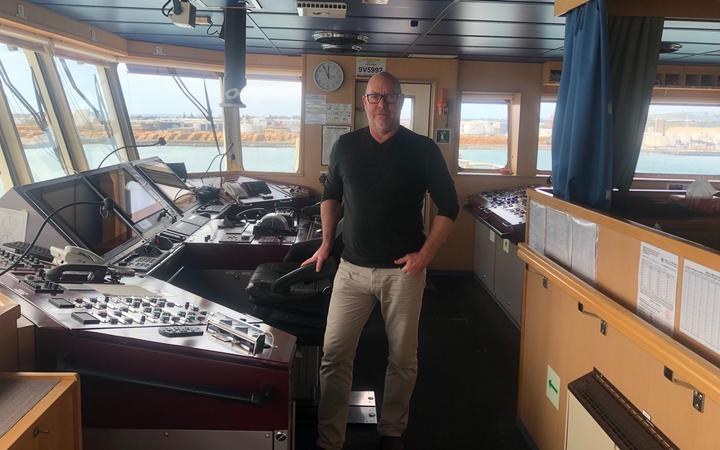 Crews on ships coming into New Zealand ports are not allowed ashore and must wear PPE gear every time they are on deck.

Wayne Turner is the master of Capitaine Tasman, a container ship that sails between Mount Maunganui, Auckland, Noumea, Suva and Lautoka – making a 17-day round trip.

New Zealand, Noumea and Fiji are all countries without community transmission of the virus.

Turner said effectively the crew were in constant isolation.

“It needs to be managed so that people can have those basic human rights, provided that [they] take appropriate action, they need to be able to get off the vessel, stretch their legs, [get] fresh air, change of scene.

“Just the normal stuff you need for psychological wellbeing, it is worse than being in prison,” he said.

Crew were also not allowed ashore in Fiji or Noumea, so they were trapped on board, Turner said.

“We don’t get any leave at all and no visits.

“It is pretty inhumane what seafarers are having to face and for no real reason. It’s a lack of understanding on the part of the powers-that-be as to the real risks that exist, which are negligible, if at all.”

Turner said while crew must wear PPE gear at all times while on the deck in port and can be fined if they do not, stevedores coming on board to load or discharge cargo, do not have to.

He said all of the 18 crew, including himself, have their temperatures taken twice a day and it is logged.

“We have no contact with the external world effectively.”

Turner said as a New Zealander he had been Covid tested and isolated for the past two months. He was not able to leave the ship nor visit his Mount Maunganui home, family or friends and they could not visit him.

“Home is basically 2-3 kilometres away.”

Some other crew members have not been ashore since March.

“It’s pretty inhumane to have been on board from March without having been able to step off the vessel at any stage.”

He said the most crew could do was walk around the deck while at sea and weather allowing, which was frustrating for them.

Turner is concerned about the mental health of his crew and the many others at sea.

“The kind of people that are going to survive this kind of role are well used to that, but not to this degree and I suppose that is the part that is unfair and unreasonable that we are used to being away from our families for months, but you do have the social aspects of being onboard which is walks ashore and time ashore in various ports and all of that, but not having that, it is not good for you.”

When he finally comes to sign-off the ship Turner will need to go into mandatory 14-day isolation, minus the four days at sea sailing from Lautoka, after having effectively been isolated for four months.

Turner said the plight of seafarers during Covid-19 has been ignored by the government mainly because of the small number of people and for the most part foreigners.

He is also a solo yachtie and is worried about hundreds of yachts that have been refused permission to sail to New Zealand to avoid the upcoming tropical cyclone season in the Pacific.

“They are as isolated from Covid as we are and they are in areas with no Covid and yet they to cannot come down to New Zealand unless you are on a luxury yacht and you can go alongside at Queens Wharf in Auckland, which is happening currently and so it is one rule for one and a completely different rule for others,” he said.

A spokesperson for Customs says while it enforces Covid-19 restrictions on seafarers, it has no control over changing the rules, which have been set by the Ministry of Health.

The Ministry of Health said due to the ongoing global Covid-19 pandemic New Zealand’s maritime border requires the testing, isolation and quarantining of all ship’s crew on arrival into the country.

These requirements for cargo and shipping vessels are similar to many other parts of the world and the master of any ship intending to arrive in New Zealand should, before the ship arrives in New Zealand, take reasonable steps to ensure that every person on board the ship is aware of the isolation or quarantine requirements.

Due to these current Maritime Border requirements which much of the world is operating under, the Ministry of Health encourages shipping companies to review their schedules – which are often on high rotation from port to port – to allow sufficient time for crew to have time on shore once they have achieved a negative result.

Under normal circumstances, a person who arrives in New Zealand on board a ship must remain in isolation or quarantine for at least 14 days on board the ship on which they arrived in New Zealand but this includes time at sea and many cargo ships arriving into New Zealand are long-haul and therefore crew would not be required to sit at port for 14 days.

It said all crew members do need to meet the low risk indicators, including a negative test, before disembarking.

In response to the Ministry of Health, Captain Turner said the guidelines assume vessels are at sea for 14-days or more to achieve isolation. Many ships are on rotations that do not have 14-days between international ports.

Capitaine Tasman calls at Noumea, Suva, Lautoka, Tauranga and Auckland. There are no community Covid cases in New Caledonia or Fiji.

He said no crew member on Capitaine Tasman has had shore leave since March and maximum time at sea is four days so they cannot meet isolation requirements.

Captain Turner said no Covid testing is available to crew members in port except for those at the end of their contract and going home. Crew members wanting to go ashore require 14-days isolation, a Covid test and written MoH approval.

”Maximum time in port is two days, so meeting the requirements is not possible.”

”The Vessel’s crew do not go ashore at any port, so difficult to see how infection can occur,” he said.