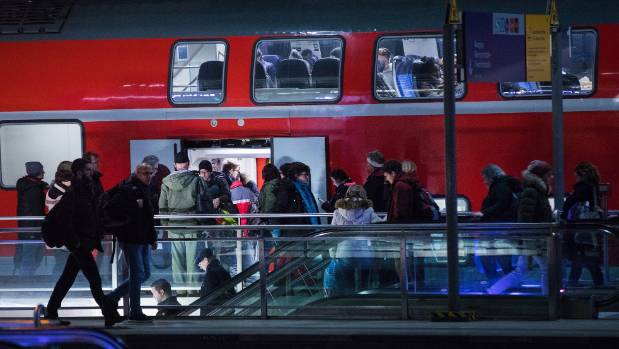 Commuters board a Regio train at a railway station in Berlin.

When the discussion turns to the rising costs of living in many global cities, one factor rarely goes unmentioned: public transport fees.

Many Germans, however, might soon have to spend a whooping $0.

For a start, residents of five middle-sized cities are expected to benefit from the scheme this year, but it could eventually result in the end of bus or subway tickets across the country.

The plans are included in a letter the German government sent to European Union officials, and was obtained by a number of news agencies and media outlets.

So far, experiments with free public transport have usually been short-lived.

When Paris was plagued by thick smog in 2014, authorities responded with an unprecedented idea – banning half of all cars and making public transport free.

But the measures only lasted one week. Limited experiments with free public transport were eventually also stopped in Portland and Seattle.

Germany’s latest, and more radical plans are similarly supposed to solve the lingering problem of air pollution in German cities, which recently prompted the threat of major EU fines.

More than 130 cities in Europe are currently affected by “life-threatening” air pollution, according to the European Commission.

They are believed to be responsible for about 400,000 deaths each year in the European Union.

And even though Germany is far from being Europe’s most polluted nation, the topic is taken more seriously here than in most other places which have repeatedly breached EU limits on nitrogen dioxide and fine particles.

In Germany, the topic also gained renewed attention after the Volkswagen emissions cheating scandal became public in 2015, which implicated the car manufacturer in having engaged in a deliberate effort to make its products appear more environmentally friendly than they were.

“We are considering public transport free of charge in order to reduce the number of private cars,” three German government ministers wrote in their recent letter to the EU, according to AFP.

“Effectively fighting air pollution without any further unnecessary delays is of the highest priority for Germany.”

Those plans would be costly, as many German transport companies currently finance about 50 percent or more of their earnings through ticket sales.

Instead, under the new scheme, the government would be expected to jump in to shoulder the burden, which would ultimately make public transport an almost fully tax-funded system.

The free public transport plans would be complemented by other measures, such as car-sharing schemes or expanded low-emissions zones within cities.

In Germany – a nation where cars drive on autobahns without a speed limit – the move might convince many vehicle owners to take the subway instead, the government hopes.

But it could also overburden public transport networks in major cities such as Berlin, Hamburg or Munich that are already bustling during rush hours.

The plans, some fear, would result in an exponential rise in associated costs because of costly network expansions.

And would money alone be sufficient to get Germany’s public transport ready for the possible influx?

Berlin’s new airport, for example, was supposed to open six years ago.

The never-ending saga of the airport continues to highlight the country’s struggle with large-scale infrastructure projects – or perhaps this is all part of an ingenious plot to force Germans to book environmentally-friendly trains instead of polluting planes.