Home News Petrol cars headed the way of the horse and cart – what’s next? 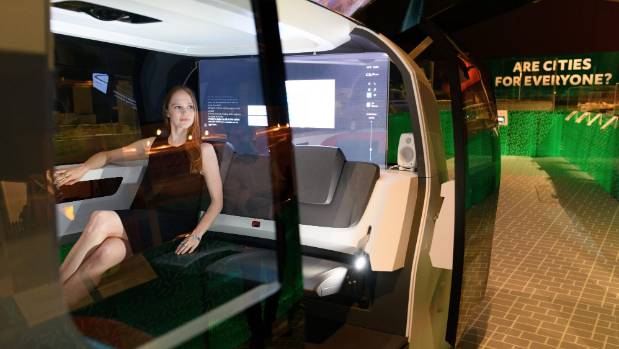 The New Zealand Transport Agency has begun thinking about how it may need to prepare for the arrival of autonomous vehicles such as this Volkswagen driverless concept car.

The transport revolutions of the past – railways, petrol cars and air travel – have shaped our cities and driven some of the most sudden and dramatic changes in society.

So it’s probably no wonder that transport is one of the first things we consider when we think about future technology.

Meanwhile, the leading edge of transport research and development has skipped ahead a mile.

Last month, Uber began laying the groundwork for a fleet of autonomous electronic helicopters or drones that would ferry commuters between the rooftops of skyscrapers, so they could bypass congested city streets.

The company aims to have a commercial service operating in Dallas and Dubai by 2023.

One vehicle that could perhaps do the job is being trialled in – who would have guessed it – New Zealand.

United States company Kitty Hawk, funded by Google co-founder Larry Page, has been testing a self-driving “flying car” called Cora, which can take off and land vertically, in Canterbury since October.

Spokeswoman Anna Kominik said it had settled on New Zealand for the trials after a global search for a jurisdiction that was “safe, had aviation experience and was a good place to do business”.

Kitty Hawk assumes Cora will be used for an Uber-like “ride-sharing” flying-electric-car service, rather than being a modern take on the exclusive corporate helicopter.

The Cora won’t be available for sale to individuals, it says, and is instead “about giving everyone a fast and easy way to get around that doesn’t come at the expense of the planet”.

However, Kitty Hawk is also trialling a one-person vertical take-off “personal aircraft” called the Flyer that is designed to fly up to 10 kilometres on a single electric charge. 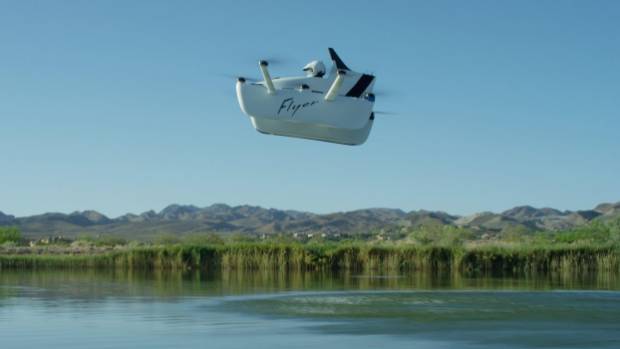 The Flyer is designed to travel for up to 20 minutes at 20 miles per hour, though it’s currently limited to flying over water at an altitude of only 10 feet.

Coming back down to earth – but not with a bump – Telsa founder Elon Musk envisages a network of “hyperloops” that would smoothly whisk people between cities at up to 1200kmh, which is just under the speed of sound.

The incredibly high speeds touted by hyperloop researchers are conceivable because people would travel in pressurised “pods” that would glide on magnets, pushed by magnetic pulses through tubes that were kept at a near-vacuum to reduce air resistance.

One of the huge (some think insurmountable) engineering challenges is creating and maintaining something close to a vacuum in tubes that could stretch hundreds of miles.

Without the near vacuum, hyperloops just become a bit like a Maglev train in a tube.

Virgin founder Sir Richard Branson has signed a “preliminary agreement” to build a hyperloop that would transport people 160 kilometres between the Indian cities of Pune and Mumbai in 25 minutes, implying a less whizzy average speed of about 350kmh.

Its tubes would be depressurised to about 100Pa (pascals), equivalent to the very thin air pressure that exists 60km above the ground.

Branson, who has come off the bench to personally chair his Virgin Hyperloop 1 venture, told the BBC he believed it could transport people in Britain “far quicker, in far greater numbers, with far greater convenience than any other train network in the UK”.

If ever built in New Zealand, a hyperloop could cut the land-travel time between Auckland and Wellington to under an hour, and the commute time between Hamilton and Auckland to less than 10 minutes.

KiwiRail general manager of planning David Gordon says KiwiRail “has not formally looked at hyperloop technology for New Zealand and has not formed any view on it”.

But Christchurch consultant Roger Dennis is one of a growing number of professional future-watchers who argue they are an advance we can definitely count on.

Dennis forecasts self-driving trucks and cars will first prove their safety in the confines of mines, university campuses, ports and hospitals before being gradually allowed onto public roads by regulators.

Tragedies such as the death in March of a pedestrian in Arizona, who was hit by an Uber vehicle travelling in autonomous mode, will prove only an unfortunate “blip”, he believes.

“Driverless trucks have been used in mines for a number of years and, when they remove the human driver, accidents go down and productivity goes up. Human-driven cars kill more people every year than autonomous cars ever will.”

Self-driving cars may not be given licence to roam all of New Zealand’s eclectic mix of public roads in one swoop. Regulators may instead open up the road network in phases, he says.

“A logical approach would be to say, ‘We think these roads are suitable for autonomous vehicles and there’s another set of roads where it won’t work’. Then, as artificial intelligence improves, you will see more and more roads become certified.”

The New Zealand Transport Agency is starting to prepare for the arrival of autonomous vehicles (AVs), says one of its managers, Martin McMullan. 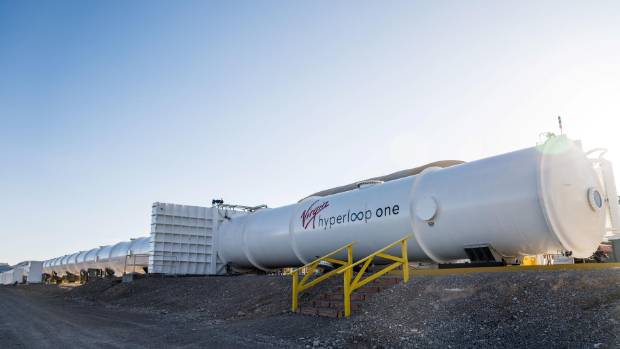 Virgin is one of the companies pioneering hyperloop systems, which could let people travel on land at up to 1200 kilometres an hour.

Trans-Tasman body Austroads, on which the agency has a board seat, produced a report last year on changes that might be required to the road network.

It stressed the benefits of making intersection designs and machine-readable signs “consistent”, so they could be reliably interpreted by software.

“Feedback suggests that many AVs will be designed to operate on our road networks as they currently are”, but existing infrastructure was “problematic” for some manufacturers, the report concluded.

“Roadworks are a key aspect noted to be of particular concern to AV manufacturers and system suppliers. It is necessary to ensure that roadworks become well planned events.”

Colin Gavaghan, director of the New Zealand Law Foundation Centre for Law and Policy in Emerging Technologies at Otago University, says it’s only “human” for AV accidents to weigh heavily on our minds.

“I’d wager that one pedestrian death from a driverless car would stand out in people’s minds more than all of the 300-odd road deaths in New Zealand last year combined.”

People imagine they are safer when they are in control of a vehicle, and “no amount of actuarial data can budge that belief”, he says.

“That said, I’m not sure that we should be settling for ‘a bit better than the status quo’ if it’s reasonable to expect driverless cars to be much safer.

“I have a vision of a future where car deaths are as rare as air traffic deaths today, and we should be demanding that level of safety.”

Research firm Bloomberg argues the world is unlikely to run out of lithium before the electric vehicle (EV) revolution is complete, even if it remains an essential ingredient in batteries.

Although not super-abundant, lithium is not a “rare earth” metal, with discovered global recoverable reserves estimated at somewhere between 10 million and 40m tonnes and rising – potentially enough to power more than 10 billion electric cars, according to Bloomberg.

Neither would New Zealand be likely to run out of electricity, according to Electricity Authority chief executive Carl Hansen.

“Electrifying all light vehicles would increase electricity demand by approximately 15 per cent, but this will likely occur over several decades,” Hansen says.

“We’re confident that the industry can cope with building generation in a timely way to meet the demand increases.”

Electricity prices might not even need to go up. “Over this time period there’s a high chance that electricity prices will decline in real terms due to the declining costs of technology such as small-scale solar generation.”

The same is true for transmission costs, he says. “It is possible the average cost of delivering electricity to consumers could decline due to higher use of existing network assets, especially during off-peak hours. 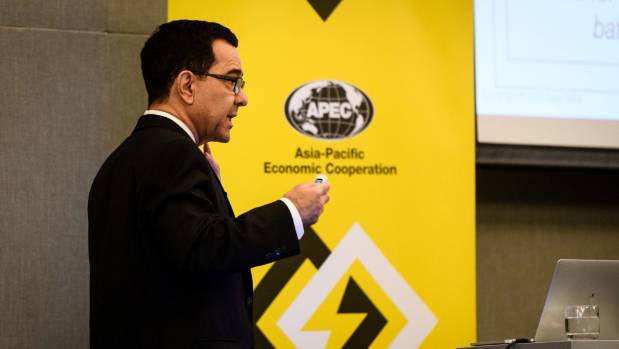 Tony Seba believes petrol cars will go the way of the “horse and cart” far faster than most planners expect.

There is less agreement on when EVs and AVs may take over.

Right now, the switch to conventional self-driven electric vehicles has only just begun.

At the end of May, there were 5984 EVs registered in New Zealand, not including plug-in hybrids, according to the Transport Ministry.

That’s up from just 735 two years before and 2444 a year ago, but still a drop in the ocean among the total fleet of 3.6 million light vehicles.

Stanford University economist Tony Seba turned heads at an Apec conference in Wellington in November when he forecast no petrol vehicles would be built after 2025.

He believes that, by 2030, most journeys in the US will be taken “Uber-style” in fleets of self-driving cars that will pick people up and drop them off.

In the US “200m cars are going to be stranded – useless”, said Seba, who is known for his bold forecasts.

At the conservative end of the spectrum, the Transport Ministry forecasts EVs will still only make up 40 per cent of the fleet by 2040, even though it believes the typical lifetime cost of owning an EV will fall below that of a petrol car equivalent by about 2025.

The ministry is not making any forecasts about self-driving cars. But  McMullan says if AVs follow the pattern of other vehicle technologies they will take between 10 and 30 years to dominate vehicle sales, and then at least a further 20 years to squeeze out the existing fleet.

Dennis – noticing a Tesla electric car pass by his window as he speaks – says the “safe money” is on it being eight to 15 years before AVs become noticeable on the roads.

“The two big barriers will be that the last 20 per cent of the technology challenge will be difficult, and regulation and public policy.”

The obvious roadblock for drone transport and electrically powered flight in general comes in inventing the battery technology that could provide the necessary power-to-weight ratios.

British vacuum cleaning inventor James Dyson announced Dyson’s move into the electric-vehicle business last year and is among those betting big on new solid-state batteries that would have a solid electrolyte instead of the conventional liquid one.

Last month, carmakers Toyota, Nissan and Honda and battery manufacturers Panasonic and GS Yuasa received a US$14m grant from the Japanese government to team up on solid-state battery research.

These could at least double power-to-weight ratios at the same time as slashing recharge times by a factor of six, according to some researchers.

Dennis says there is “always interesting stuff in the labs”, but cautions battery technology has not been  a fast-moving field, at least up to now.

A “10-year timeframe” would be realistic for any breakthroughs, he believes.

“I think everybody finds it really difficult to think long term, and the classic example of this is the rebuilding of Christchurch, New Zealand’s largest infrastructure project costing more than $40b.

“There are at least four new car parking buildings in the CBD, yet if you look at Oslo in Norway, their CBD is going to be car-free by 2020. These are multi-storey buildings whose usage will probably start to tail off in 10 to 15 years – maybe sooner.”