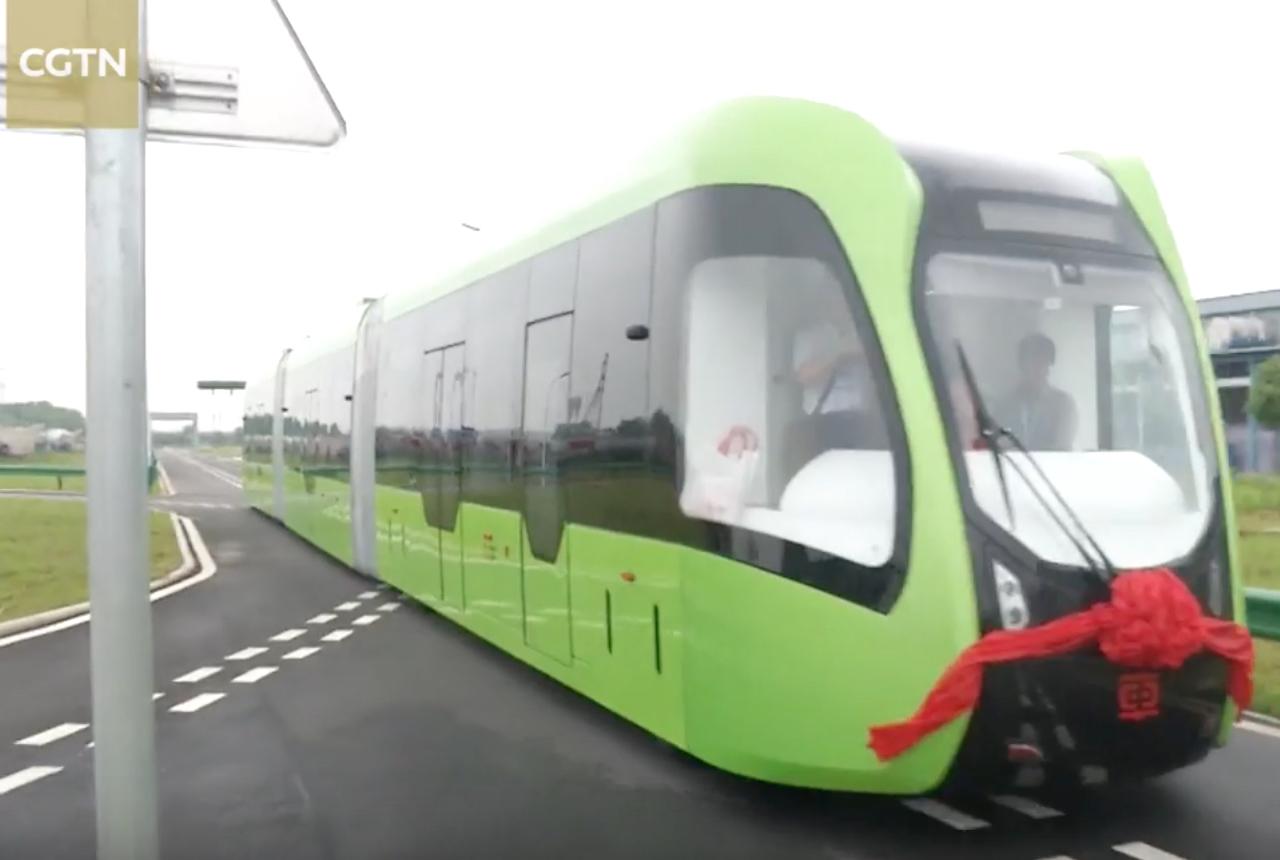 The Autonomous Rapid Transit (Art), which was unveiled in the city of Zhuzhou on 2 June, is around 30 metres long and is fitted with sensors that detect the dimensions of the road. This enables the vehicle to follow routes without the need for metal rails, Feng Jianghua, a chief engineer behind the project, said according to Xinhaunet.net.

Each vehicle can hold up to 307 passengers, and is said to navigate the streets easier than a bus while being more adaptable than a train. It has a top speed of 70kmph.

The technology behind the Art was developed by Chinese railmaker CRRC Zhuzhou Locomotive which also designs parts for the country’s high-speed railway.

Instead of having steel wheels like a train, Art is fitted with rubber wheels attached to a plastic core which are linked to its especially designed guiding technology, The Paper.Cn reported.

Its creators say that Art is significantly cheaper than a metro service, which costs between 400 to 700millon yuan (£46 to £80million) per  km to build. In contrast, Art costs between 15million yuan (£2million).

The virtual train was unveiled as engineers across the world attempt to modernise transport infrastructure.

SINGAPORE – A collaboration between Australia and New Zealand could demonstrate how countries can pool resources to develop autonomous vehicles.

The collaboration will “minimize duplication, share knowledge, accelerate learning and add to what each party is doing,” Damen says, elaborating on his presentation about ADVI during last month’s Autonomous Vehicles Asia 2017 conference in Singapore.

“The New Zealand government is now formally represented at a senior level on the joint governing committee and will contribute to the direction-setting and program development,” he adds. Touching on the similar shuttle bus trials under way in both countries, New Zealand test results will be added to information from Australia’s experience.

Damen says the successful adoption of autonomous vehicles will bring Australia more than A$100 billion ($75 billion) in societal benefits, including improved road safety and better commercial productivity through decreased congestion.

He is calling on other Asian countries to enter into bilateral and multilateral collaborative arrangements to work with Australia and New Zealand. Apart from better preparing communities for the AV era, he believes a strong regional focus will lead to “cooperation on regulation-setting and accelerating the uptake of AV technology.”

With road commuting accounting for 79% of all transport in Australia, Damen says it is imperative for Australia to capitalize on AV technology. “To be competitive, we must adopt driverless technology and do it early,” he says.

The government also is assessing legislative changes that may be needed and how to frame awareness programs in how to use AV systems.

Now in its second of four phases, the country’s transition toward autonomous road transport is being coordinated under the ADVI, a partnership of government, industry and academia. It is  undertaking full-scale industry operational field tests, research, development and investigation involving about 100 partners, including automotive and technology companies such as Volvo, Mitsubishi, Telstra, Navya, EziMile, Seeing Machines and Codha Wireless.

Damen notes ADVI welcomes all parties that wish to participate, not just those already a formal part of the partnership. The third phase involves policy, legislative, regulatory and operational changes for wide-ranging adoption of driverless vehicles, while the fourth stage will see the introduction of such vehicles to public and private road networks.

“We have started on Phase 3 in parallel with Phase 2,” Damen says. “The intent is that Phase 2 runs for another 18 months and because Phase 3 is running in parallel to a certain extent, we are able to accelerate the outcomes.

“We are aiming for 2020 for Phase 4,” but it will depend on the outcomes of the earlier phases as well as a decision by a national transport infrastructure ministerial council that includes federal, state and local government representatives, added Damen.

The city-state of Singapore also is undertaking work on developing AVs because it has a pressing need to improve urban mobility, bearing in mind it has a population density of nearly 3,014 persons per sq.-mile (7,807 per sq.-km) and a limited land area of just 1,780 sq.-m (720 ha).

Touching on the challenges facing Singapore, Niels de Boer, program director of the Centre of Excellence for Testing & Research of AVs at the country’s Nanyang Technological University, says there will not be sufficient space for the current “12% of land used for roads” to be increased in tandem with population growth.

Competing land use aside, he highlights the issue of “manpower constraints, as the average age of public transport personnel is over 40 years.”

Singapore envisions “a new paradigm for urban logistics,” de Boer says. Upon successful trials, a new generation of autonomous buses will pave the way toward greater road safety and reliability of public transport, he predicts. The aim is for autonomous bus services to be integrated with a network of driverless vehicles that could include self-driving taxis and autonomous car sharing, thereby making personal vehicle usage unnecessary. The vision for autonomous vehicles also includes the freight and utility sectors.

As early as 2013, Nanyang Tech began operating a self-driving electric shuttle within its campus and the neighboring CleanTech Park. The knowledge gained is being used to develop two electric hybrid buses that will operate between NTU and CleanTech Park with a possible link to the island country’s east-west mass rapid transport system.

Passing the first milestone allows for trial of vehicles at One North, while the second milestone signifies approval to operate outside the test site, for which regulations will have taken effect in mid-2017. Definition of the third milestone is still a work in progress, according to de Boer.

Tentative timeline indications are for prototype demonstration trials involving autonomous buses and shared driverless cars for first mile-last mile travel during 2016-17. It will lead to operational trials in 2018-19 at One North and beyond, and subsequently to pilot deployments from 2020.

The societal and economic benefits are not the only push factors for the development of AVs, which are expected to drastically reduce accidents globally, as past surveys show human errors account for 90% of accidents, according to speakers at the Singapore conference.