CRRC and KiwiRail signed a letter of intent to expand their co-operation during a visit to New Zealand by Chinese Premier Li Keqiang on March 27. Chinese companies have delivered diesel locomotives and wagons to New Zealand since 2009, and future projects could involve the passenger rolling stock sector. Northland Regional Council also discussed possible Chinese participation in the development of new road and rail links. 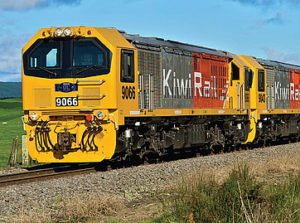 Two rail sidings at KiwiRail’s Southdown freight hub have been transformed to accommodate “giant” forklifts able to carry 80 tonnes of containers in order to improve the transfer of freight around the North Island generated by the new “mega ships” calling at the Port of Tauranga.

KiwiRail chief executive Peter Reidy says the upgrade illustrates his business’ commitment to support its customers’ growing demand in the aim of working collaboratively to “boost New Zealand’s exports and grow the economy”.

“The increasing traffic from North Island ports and the arrival of mega ships carrying thousands of containers means KiwiRail needs to ensure we have the capacity to support this increased demand,” he says.

“As well as enabling our customers, the upgrade will lead to improved safety, increased reliability and greater efficiency of our rail services.

“Our people did an exceptional job and completed the project on time and within budget. We are very proud to be playing our role in helping to grow New Zealand.”

In the piece, Mr Reidy acknowledged the decision was “never going to be easy”, but was taken after careful consideration of all options in a 24-month period of consultation with affected stakeholders.

“Our strategy of simplify, standardise and invest has been hindered by effectively operating a railway within a railway — diesel trains to Hamilton, then electric, then back to diesel again,” he stated.

“The complexity of the electric/diesel mix also meant having to employ drivers and mechanics with specific electric fleet knowledge or engineering skills. It meant more complicated train plans and load schedules.

“Some will ask why KiwiRail couldn’t just make the whole NIMT electric? That would cost $1 billion or more and would also require the networks feeding into the NIMT to be electrified as well, something estimated to cost $2.5 million per kilometre of single track. One day that might make sense but there are challenges such as the Wellington area’s electric network running on a different power system to Auckland’s.”

Addressing criticism about the environmental ramifications of the decision, Mr Reidy noted that even using diesel locomotives was better for than environment contrasted to those cargoes otherwise being moved via road.

Furthermore, Mr Reidy emphasised this was “not a forever decision”.

“Even though diesel trains are the best option for KiwiRail right now, the electric infrastructure will continue to be maintained on the line, leaving that as an option should it be required in the future.”

Road Transport Forum (RTF) chief executive Ken Shirley has expressed his members’ displeasure with a pending 15.5% “earthquake levy” to be introduced on commercial vehicles travelling on the Interislander.

Mr Shirley says the levy, which is due to be implemented as from the middle of next month, highlights the “deep seated” issues being faced by Interislander parent company, KiwiRail, which have been “brought to the fore following the damaging earthquakes”.

“The proposed levy is more an ongoing ‘capacity levy’ rather than an ‘earthquake levy’ and the restoration of the Picton to Christchurch direct road and rail routes will not solve the problem,” he says.

“There is a potential for this levy to become permanent once imposed under the guise of an ‘earthquake levy’.”

He says road transport operators are facing resistance from customers when negotiating recovery of this new cost which comes on top of the additional costs stemming from the alternative route connecting Picton with Christchurch and regions further south.

“Fundamentally it is now a different freight task. Many report additional costs of at least 20%.”

However, Mr Shirley emphasises that road transport operators “cannot and should not absorb these additional costs”.

“A greater effort is required to ensure that freight costs are met by the customer and consumer. An awareness and understanding of the problem is always a good starting point.”