New Zealand – Pacifica Shipping today confirmed that it has acquired a larger 1700 teu vessel for deployment on its premium coastal shipping service in New Zealand. The MV Moana Chief – which is expected to commence operations formally in September 2019 – will meet growing domestic and international transhipping cargo demand. Pacifica was acquired by The China Navigation Company (CNCo) – parent of Swire Shipping – in 2014.

Brodie Stevens, Country Manager, Swire New Zealand, said: “With the acquisition and an increase in tonnage from 1,100 to 1,700 teu, we strongly believe Pacifica will be in a good position to meet rising domestic cargo and transhipment demand. We want to expand the range of valuable domestic transport solutions currently already provided by Pacifica, and this will enable us to do so. Coastal shipping in New Zealand continues to play an important part in the country’s domestic economy. It is also highly complementary with road and rail networks.”

According to a report by Deloitte in 2016, 236 million tonnes of freight are moved within New Zealand annually. The size of container ships has been increasing. Coastal shipping will continue to play a role in reducing greenhouse gas emissions per container, and will also be a factor in New Zealand manufacturers’ decarbonisation of their supply chains.

Additionally, New Zealand’s domestic freight volumes are forecast to more than double by 2040, as stated in The National Freight Demand Study 2008, and confirmed again in the NFDS update, completed in 2014 – “Even with massive investment in land transport this increase could not be accommodated by road and rail alone. By growing coastal shipping, New Zealand can take a load off the other transport modes and contribute to a more efficient land transport network. By comparison, in Japan, a country with a similar geography, more than 30% of freight is carried by sea.”

Details of the acquisition are confidential.

Hamburg Süd and The China Navigation Company (CNCo), a subsidiary of the Swire Group, today announced an agreement for CNCo to acquire the bulk shipping business in Hamburg Süd which includes Rudolf A. Oetker (RAO), Furness Withy Chartering and the bulk activities in Alianca Navegacão (Aliabulk).

The bulk shipping business in Hamburg Süd operates from Hamburg, London, Melbourne and Rio de Janeiro with a chartered fleet of approximately 45 vessels in the segments: Handysize, Supra/Ultramax and Kamsarmax/Panamax. Whereas liner shipping activities in Hamburg Süd involves transporting cargo in containers, bulk shipping involves flexibly transporting dry goods – such as agricultural raw materials, ore and steel – in bulk carriers from port to port worldwide, depending on the customer’s requirements.

CNCo, headquartered in Singapore, is the wholly owned deep-sea ship owning and operating division of the multinational Swire Group. The company today employs around 2,500 employees globally and owns and operates about 135 vessels consisting mainly of dry bulk carriers and multipurpose liner vessels. Swire Bulk, its dry bulk trading business, was established in 2012 and trades a modern fuel-efficient fleet of over 100 Handysize and Supra/Ultramax vessels comprised of owned, long term and short term-chartered tonnage. The business is focused on being a leading provider of sustainable and innovative shipping services and being partner of choice to its’ long-term charterers and industrial customers.

Closing of the agreement is expected by the end of the first quarter of 2019, subject to regulatory approval. The parties have agreed not to disclose the sales price. The RAO Tankers business unit is not included in the sale and will remain part of the Hamburg Süd Group.

The China Navigation Company (CNCo) opened its China headquarters officially in Shanghai on 05 November 2018, marking a significant return to its birthplace 147 years ago, and a significant milestone in its history.

CNCo started operations on the Yangtze River in 1872, operating a modest fleet of Mississippi-style paddle steamers. Today, CNCo is a major global player in the shipping scene, with operations spanning Australia, China, PNG, Fiji, India, New Zealand and the US. Headquartered in Singapore, CNCo owns and manages more than 130 vessels through its three core divisions – Swire Shipping, Swire Bulk and Swire Bulk Logistics. 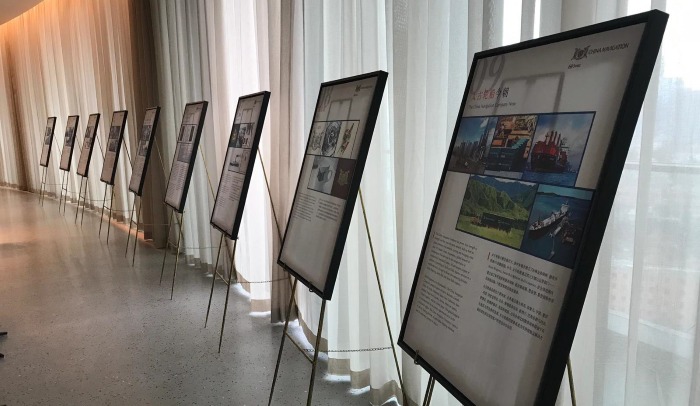 A series of posters showcasing the growth of CNCo in China over the years.

With the rise of China as a major player in the shipbuilding industry, CNCo has built strong partnerships with key Chinese shipbuilders. Mr James Woodrow, Managing Director of CNCo, said, “Shipping markets have come to depend heavily on China and we believe the shipping industry will continue to be greatly influenced by China. While China generates demand, it also creates supply.”

“China’s growth as a major player in the shipbuilding industry has truly been remarkable. The partnerships we have established with key Chinese shipbuilders is testimony of this growth. We have since built 37 vessels in China and have eight feeder container vessels to be built at the China State Shipbuilding Corporation’s Wenchong shipyard for delivery in 2019/20. We will continue to assess modern and fuel-efficient designs to provide an industry-leading product to our customers in China far into the future,” added Mr Woodrow.

The opening ceremony was officiated by Barnaby Swire, outgoing Chairman of CNCo, incoming Chairman Samuel (Sam) Swire, James Woodrow, Managing Director of CNCo, and other members of the Board of Directors. 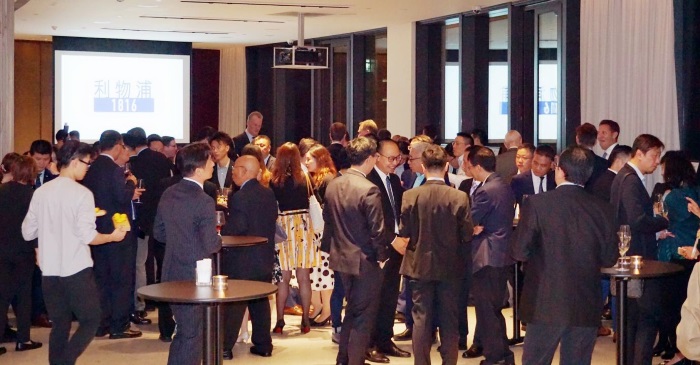 During the cocktail reception, guests, which included government officials, customers and employees, networked over food and drinks.

Said Randy Selvaratnam, Country Manager: “With our Shanghai office now being a full-fledged operating subsidiary as well as our other offices in Qingdao, Beijing and Guangzhou, we are even more confident of delivering innovative and sustainable shipping solutions that will meet the needs of our customers. Currently, we offer four separate services from China covering the South Pacific Islands, New Zealand, and North Australia trades.”

The Shanghai office houses the Swire Shipping and Swire Bulk divisions. The office is located in the HKRI Taikoo Hui building, a mixed-use development by Swire Properties situated within Jing’an District, a key commercial and financial sector of Shanghai.

From July 2018, Swire Shipping will upgrade its multipurpose liner services between North Asia and the Pacific.

Under this enhancement, Swire Shipping will be adding direct calls at the Chinese ports of Nansha and Ningbo and aligning its North Asia services to provide a 10-day service frequency between North Asia and Papua New Guinea (PNG). 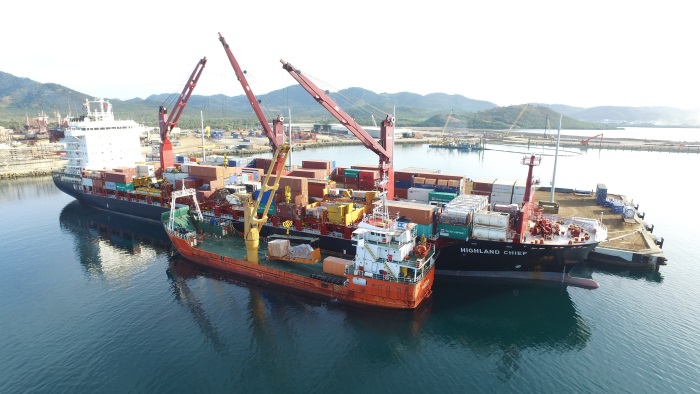 Other markets served by Swire Shipping’s North Asia services such as Townsville, Noumea, the Solomon Islands, Vanuatu and New Zealand will also benefit from access to more ports in China. 4 Donald Fraser, Swire Shipping’s General Manager for Liner Trades said, “Swire Shipping is committed to developing and upgrading our services and are delighted to provide our customers with this latest set of improvements. In particular, there will be a sailing every 10 days from China to PNG, complementing our 10-day Southeast Asia-PNG and AustraliaPNG services. We’re very excited to be offering our customers this comprehensive import and export network coverage.”
Source: Swire Shipping SWIRE Shipping has instituted changes to its services in New Zealand and the Pacific, not the least of which centred around its NZ coastal routes after the Kaikoura earthquake put some logistics infrastructure in the country out of commission.

“With the rail link temporarily out of action and road capacity under pressure and relatively expensive for some commodities, coastal shipping has proven to be a reliable and sustainable mode,” he said.

“With rail expected to reintroduce services in the coming months, cargo will likely move towards the most sustainable mode in-line with service requirements. Pacifica expects ongoing support for their mode as customers build resilience and proven sustainability into their supply chain frameworks.”

Meanwhile, Swire’s Trans-Tasman Service is in for a change in the next month.

Mr Stevens said Swire had maintained its twice monthly (TRT) service on the Tasman despite challenging conditions, and recently announced changes that would see the service move to a “fixed day fortnightly” schedule.

“In New Zealand, the service will call at Auckland, Marsden Point and Tauranga and has ceased calls to Napier, Lyttelton and Nelson, which will now be serviced by transhipment on other Swire Shipping services,” he said.

“This enhanced service will retain the port calls in Port Kembla and Newcastle but will now include Melbourne and Sydney on a direct call basis with Geelong being serviced on inducement.”

The first westbound sailing of the new service is due on June 25 out of Auckland with the Hong Kong-flagged Kokopo Chief (IMO 8907412), which is a fully cellular containership with a capacity of 725 TEU.

The first eastbound sailing will be from Melbourne on July 8, also with the Kokopo Chief.

Turning our attention north, towards the South Pacific, Swire increased its coverage into the Pacific Islands from North Asia.

“The line now offers up to six services a month from Asia to the Pacific together with services from USA, Canada, Australia, New Zealand and Europe,” Mr Stevens said.

“Annually the line makes over 450 port calls in the South Pacific, excluding Australia and New Zealand.”

Last year, Swire established offices in Apia, Suva and Lautoka. This coincided with its establishment of a fortnightly service from Australia to Prony Bay, Noumea, Lautoka, Suva, Port Vila and Santo, with transhipment serving other Pacific Island ports.

“Swire has invested in increased tonnage and this has improved its capability across the South Pacific in the multi-purpose, container and project shipping sector,” he said