Europe is building new alliances to counter an increasingly isolationist America as President Donald Trump recasts the U.S.’s economic relationship with the world.

The European Union opened free-trade negotiations with Australia this week, representing one of more than a dozen deliberations currently being conducted by the bloc. This comes on the heels of the U.S. slapping tariffs on imports from some of its most solid allies — including the EU, Canada, Mexico and Japan — in the name of national security.

But Trump’s aggressive foreign-policy stance, which has included leaving the Trans-Pacific Partnership and the Iran nuclear deal, has offended some of the U.S.’s closest partners, with EU President Donald Tusk vowing to stand up to the White House’s “capricious assertiveness.” This has raised the prospect of a shift in alliances among world powers as they seek to preserve the global trade system.

All the trade deals being concluded are sending a message that “the EU and its partners are coming together,” European Trade Commissioner Cecilia Malmstrom said in a speech in Canberra on June 18, adding they were shaping globalization and standing up for open trade. “And we need many allies to help us in pursuing these goals.”

Doubling Down
Trump doubled down on his efforts to recast Washington’s trade relationships this week, threatening tariffs on another $200 billion in Chinese imports after already identifying $50 billion in products to hit with levies. The U.S. measures have created unlikely allies among nations, with both China and the EU calling for adherence to the multilateral trade system.

This comes after Trump threw a Group of Seven meeting into chaos, rejecting a joint statement upon hearing Prime Minister Justin Trudeau say Canada would be forced to respond to the U.S. decision setting tariffs on Canadian steel and aluminum. Leaders have criticized Trump, with French President Emmanuel Macron’s office saying “international cooperation cannot be dictated by fits of anger and insults,” and Norway’s prime minister saying “the U.S. isn’t the same driving force as it used to be.”

The EU is already Australia’s second-largest trading partner after China, and an accord including New Zealand could boost the bloc’s gross domestic product by 4.9 billion euros ($5.7 billion) by 2030, according to European Commission estimates. Sectors likely to be included in discussions will be machinery, cars, electronic equipment, chemicals and metals.

‘Like-Minded Partners’
The talks with Australia come a year after the EU inked accords with Mexico and Japan and the provisional passage of a trade agreement with Canada, which took seven years to complete.

“I look forward to adding Australia to our ever-expanding circle of like-minded trade partners,” Malmstrom said in a statement. “In challenging times, it is heartening to see that Australia shares our commitment to a positive trade agenda, and to the idea that good trade agreements are a win for both sides.” 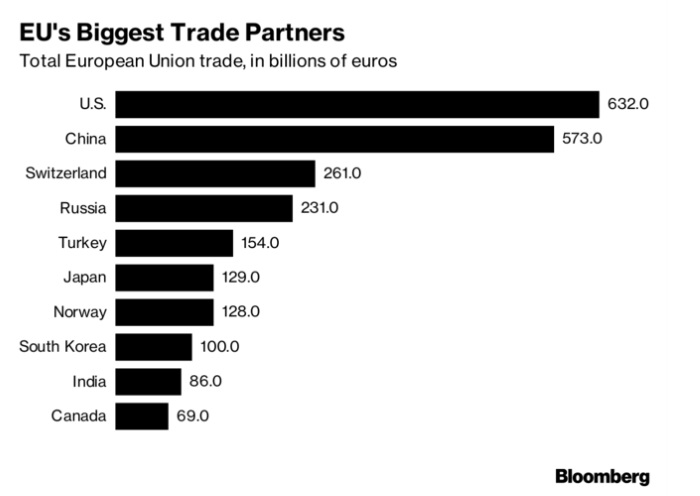 Despite the historical relationship the U.S. has with Europe, and the American role in developing the trans-Atlantic partnership, EU leaders are concerned that Trump’s actions may undermine the global system.

“What worries me most, however, is the fact that the rules-based international order is being challenged,” Tusk said during the G-7 summit in Charlevoix, Canada. “Quite surprisingly, not by the usual suspects, but by its main architect and guarantor: the U.S.”
Source: Bloomberg